I’ve traveled since the time I was a baby, but now I was ready to do my first solo trip. I bought a ticket, grabbed a bike, and traveled for 3 days across France to experience a trip that would open my eyes to new discoveries of myself and what I was capable of. 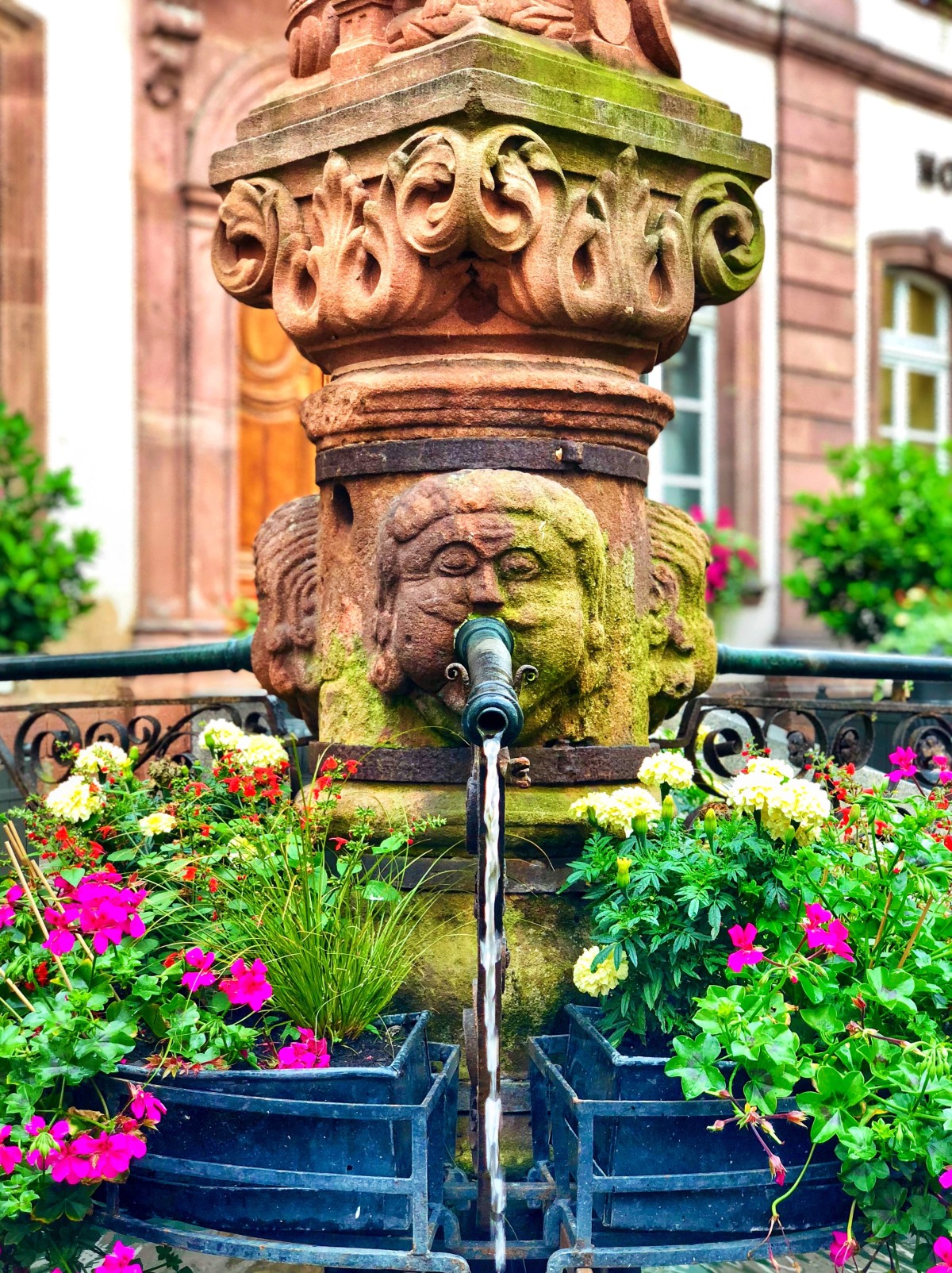 Over the years, I’ve been to so many places, mainly with family then with organized group trips. I didn’t feel ready to tackle being in a new country or city on my own…until not too long ago.

I was lucky to find a great roundtrip ticket to Paris during peak summer season with Scott’s Cheap Flights that I couldn’t pass up. Discovering Paris the November before, I knew I wanted to get out of the city to discover a new part of France. After much research, I landed on Alsace; but honestly, I don’t think I could have gone wrong with anywhere.

Next was the hard choice of what to do and how to get around. You can only get so far each day on foot and I didn’t want to be tied down to a train schedule too much. So I settled on a bike! I found Detours in France that helped me set up my trip. I highly recommend to anyone interested in this type of exploring. The company is entirely self-paced and sets everything up for you prior to arrival, including my 4 nights in hotels and 2 dinners. This allowed me flexibility to wander different little towns along the way and go at my own pace. Now, most people I told about my upcoming solo biking trip seemed to be in disbelief that I would even consider something like that. Ok, maybe it’s not the first travel idea a majority of people have, but I was excited to take on this new adventure and make my own memories.

My Bike Tour: Highlights from Strasbourg to Colmar

First stop: Strasbourg. I had seen so much of this unique city in pictures and it was the sole reason I decided to come to Alsace region and bike for 3 days. 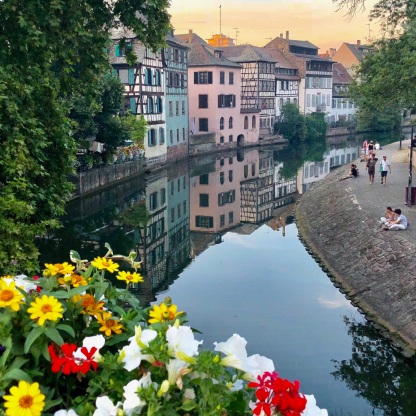 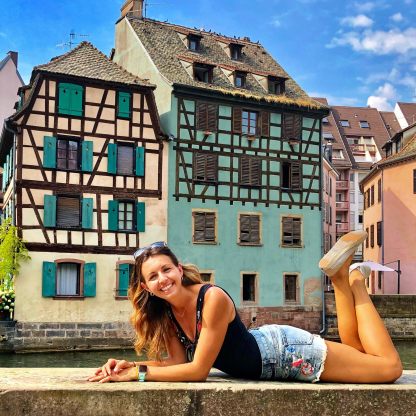 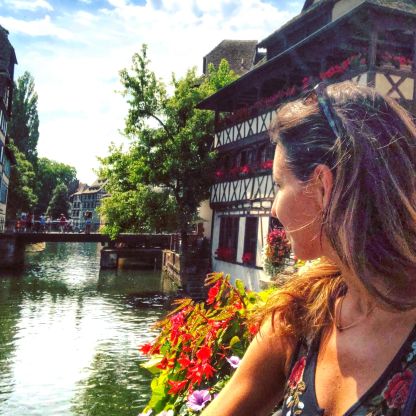 Taking in the views and watching the boats in the canal 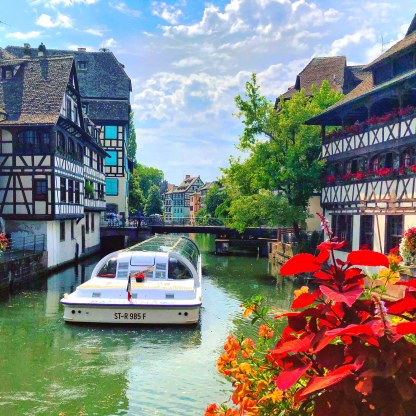 Boat ride through the canals

I knew as soon as I walked off the train in Strasbourg, I was going to love this little corner of the World. The cobblestone streets, the flowers, and all the colors of the buildings made me feel as if time had stopped. I walked from La Petite France to the cathedral in the city center at least 2-3 times to really soak up every angle of the city. Just my tripod and me.

I was filled with so much excitement. With each step I took, I was more confident and more carefree. I learned to stop and take in my surroundings, take as many pictures as I could, and have fun with it even though I was on my own. I learned to laugh at myself, especially when I was trying to the get the perfect picture at the perfect angle with my tripod as people passed by probably questioning why I was sitting on the ground next to a bridge or laying on a ledge. There’s something about being in a different city other than your own and feeling as if you can do anything out of the ordinary. There should be no regrets. Get out of your comfort zone and make memories you want to share with others and memories you want cherish for a lifetime.

All 3 days of my bike trip were very different from one another; but the scenery, colors, and excitement never wavered. I passed swans enjoying their morning bath, an amazing amount of corn, wheat, and hay fields and adorable little towns along the way. No matter if I made a wrong turn, (which happened frequently), I was filled with so much joy and confidence. I’m sure I added at least an extra hour or 2 to my journey each day with the number of stops I made to take pictures, but that’s what I was there for. I wanted to learn and absorb as much as I could.

Obernai was filled with history and castles…and by far the best meal of the trip! This town was so prosperous back in the 1500s that it had 2 fortifications around the city, 20 towers, and 4 tower gates. I was lucky enough to stay at Hôtel Le Gouverneur with a bedroom overlooking the mote on the wall of the old fortification. The town itself has so much charm from the buildings to the people. If you walk around long enough, you’ll notice the buildings start to change colors and have a more alluring feel to them as sunset get closer. 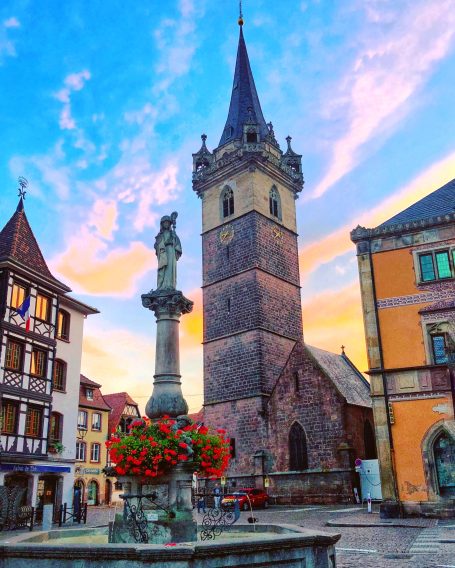 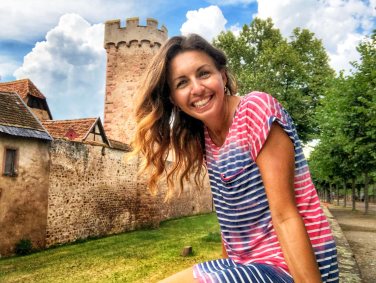 Walking along the wall outside of the city 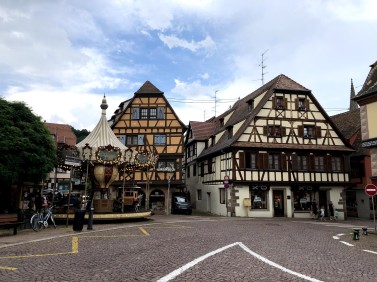 Carousels seem to be a requirement in this part of the world!

This trip was the epitome of adventure. Besides the fact that I was on my own, I allowed myself to wander and say yes to things even if it would take me off the suggested path. The best diversion I had was a nearly 2 hour round trip hike to the top of a mountain to explore and take pictures of the remains of an abandoned chateau that I could see from the road. I was determined to see it no matter how long it took me. I wanted to see the view of the countryside and vineyards from that perspective – plus it was a welcomed break from pedaling. I didn’t have a map of where to go, so I was hoping I was following the correctly painted signs up to the top. At times the images would change slightly, but I just trusted that my feet were heading in the right direction. And they were, because when I made it to the top, the abandoned stone structure was so impressive. Walking over the draw bridge into the roofless chateau I felt like a little girl creating my own castle fairytale. There were windows on the 2nd story I knew I wanted to look out of, but there was no other way of getting there except to free climb the wall. And that’s just what I did. I found little grips and holes in the stone for my hands and feet and up I went. This detour was not planned or expected, but it will remain as a major highlight of the entire journey. 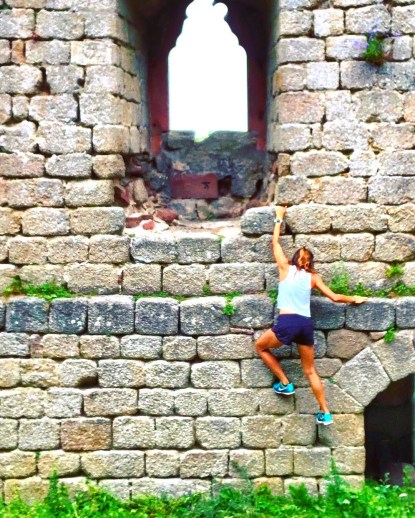 Climbing to get a better view 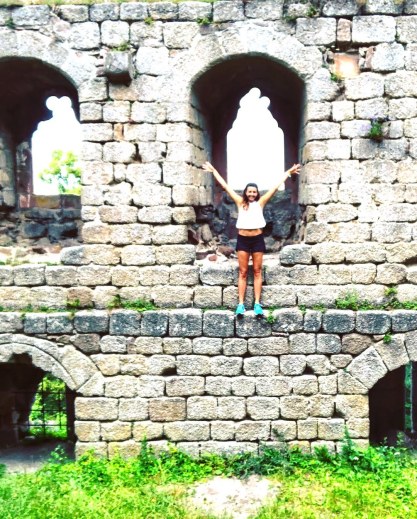 I made it and it’s totally worth it! 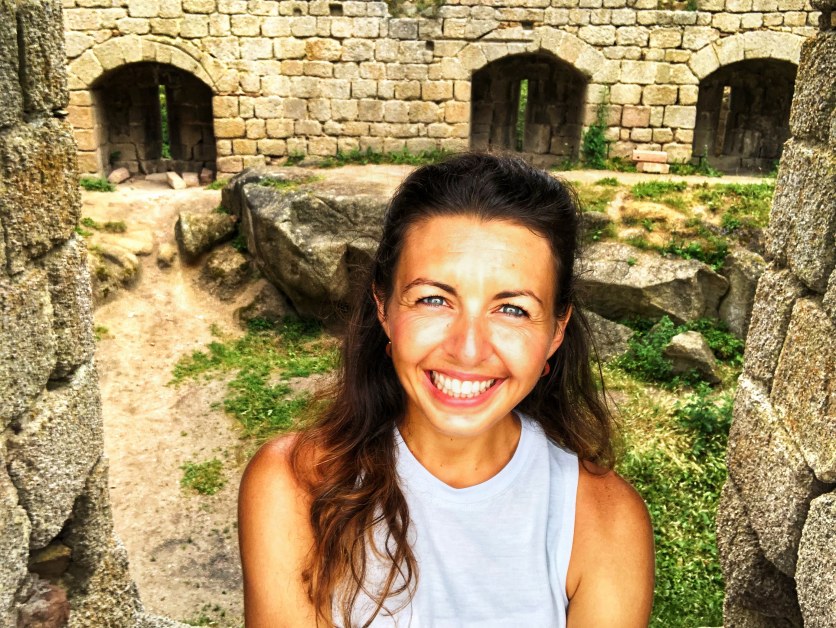 From Obernai to Ribeauville the colors of the buildings just seemed to get brighter and the flowers decorating the many fountains became more beautiful. 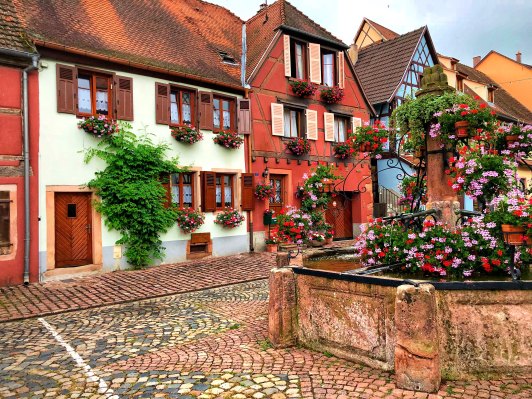 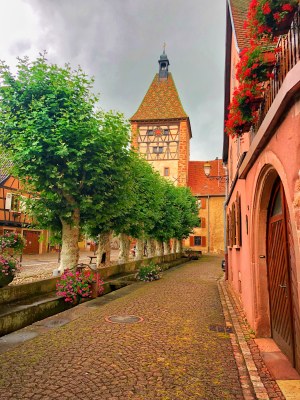 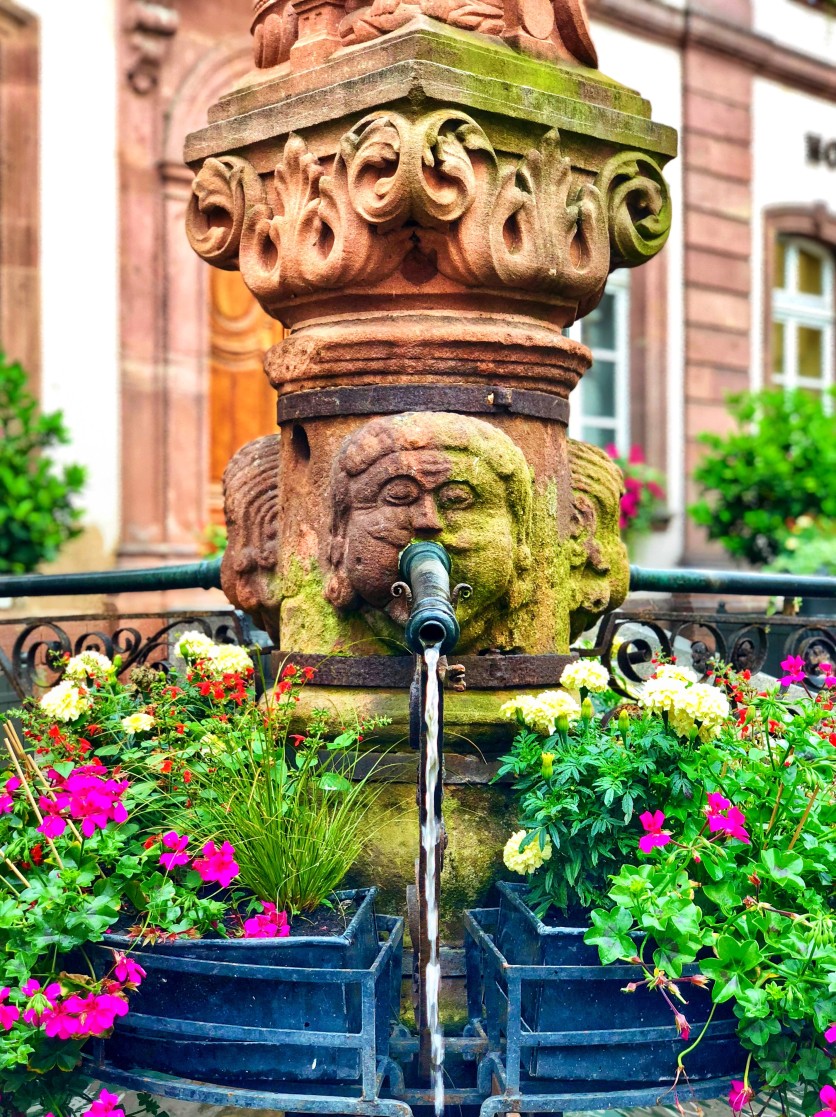 Despite how tired and sore my legs were, I still had one more stop on my grand solo adventure and I was ready to get to Colmar to walk around La Petite Venise. I was lucky enough to also be able to catch the quarter finals of the World Cup where France advanced and eventually won the Cup in the end. The streets will filled with people and there were so many flags everywhere you went. It wasn’t very hard to figure out where to watch the game, since as I turned a single street corner I found the hoards of people grouped around bars and red, white, and blue smoke bombs going off everywhere. From the overly excited atmosphere of people to the gorgeous building facades, the experience of watching a championship soccer match in Europe was one of a kind.

La Petite Venise and the streets surrounding it were magnificent. If one could construct a gingerbread village of all sorts of colors and shapes, I imagine it would look exactly like this. La Petite Venise was a lot smaller than I had anticipated, but there was still a lot to take in such as the smells and sights of the covered market hall right off the river. It was filled with all the things you want to take home for dinner. I grabbed some cheese, a fresh baguette, and grabbed a bottle of wine for myself, found a little spot next to a fountain to eat and watched children play and the locals hang outside their windows while watching the tourists down below. I was lucky enough to not only see Colmar at dusk, but also in the early morning when there was no one around. I had all the streets to myself to play and wander. I found streets that I hadn’t discovered the day before and may have been even more fantasifull. I imagined the locals starting their day by singing “Bonjour” from “Beauty and the Beast” and dancing on those cobblestone streets.

I wouldn’t change anything from my first solo trip as I made the most of each day and made my own memories that will last for a lifetime. I learned a lot about not just the towns I biked through, but about myself and what I am capable of doing. There’s no looking back now, only forward to my next big adventure!

Hi! My home base is Tampa, Florida, but have a passion for traveling. I have been fortunate enough to have traveled from such a young age, and I haven't stopped since. A few years ago I decided to do my first solo trip - it was the best decision ever! Getting to experience new cultures and new cities is when I feel at my ultimate best. This world of ours has so much to offer, we just need to get out there and see it. It's time to share my experiences and stories with YOU! Wander often 💜Always View all posts by globetrottingalex